At least two people are dead and another eight wounded in a deadly mass shooting near a McDonald’s in Chicago’s Gold Coast neighborhood.

The shooting occurred at about 10:40 p.m. on Thursday by the McDonald’s restaurant in the 800 block of North State Street, which is next to the Chicago Avenue subway station, Chicago police said.

According to police, five adult gunshot victims were transported to area hospitals. The two fatally wounded were both men. Two other men and one woman were last listed in serious condition, officials said. 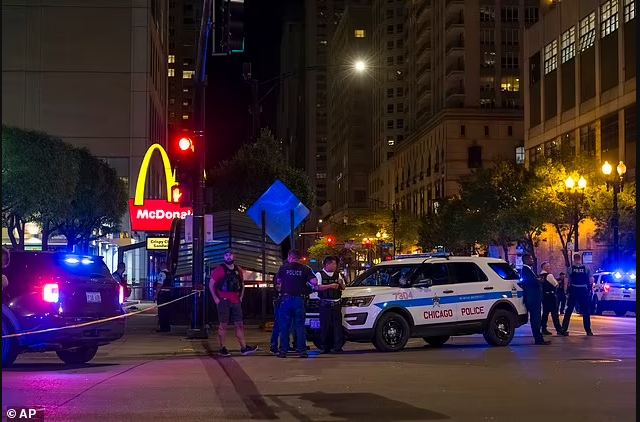 One gun was recovered and a suspect is in custody, police say. An investigation is ongoing.

As police and paramedics were treating victims on the sidewalk, the scene turned even more chaotic when a fistfight broke out between several people, witnesses say.

Police say the crime scene extended to the CTA Red Line subway station where officers were looking for a weapon.

According to officials, as riders were being evacuated and escorted off the train, a person sustained a burn injury due to falling on the tracks.

The woman, in her 20s, was transported to a nearby hospital in Red, or serious, condition.

Two witnesses say they were walking near Michigan Avenue when they heard shots fired, sirens, and police cars.

“It was frightening,” one of the witnesses said. “Cause you don’t know what’s going on. I eat by Subway here because it’s close to where I live. I go by this street and I go by McDonald’s. What if something happens while I’m walking down the street? It’s frightening and it’s scary. It makes you feel unsafe, to be honest.”

One witness says the incident began when a large group of young people got into a fight outside the restaurant, when a car pulled up and someone inside the vehicle started shooting, hitting multiple people. Those reports are not confirmed by police.

Details surrounding the circumstances of the shooting weren’t immediately released. An investigation is ongoing.

The shooting comes amid a surge in deadly violence in the city in recent years.