The unknown powers are trying to destroy my life off a tweet so does this prove that my so called suspicion was true? - Kanye West asks after being dropped by multiple brands over his his anti-Semitic comments - AlreadyViral
Search
Create
Menu
Search
Create

Kanye West has questioned why ‘unknown powers are trying to destroy his life’ while reacting to being dropped by multiple brands over his anti-Semitic comments.

The rapper took to Twitter to declare war on the Jewish community following his controversial Paris Fashion Week show, where he showcased his White Lives Matter shirts.

In a post, that has since been removed by Twitter, Kanye wrote: ‘I’m a bit sleepy tonight but when I wake up I’m going death con 3 On JEWISH PEOPLE.’

He added: ‘The funny thing is I actually can’t be Anti Semitic because black people are actually Jew also.

‘You guys have toyed with me and tried to blackball anyone whoever opposes your agenda.’

Kanye later had an interview with Drink Champs, where he also made antisemitic comments and made false claims about the death of George.

The controversial comments got him locked out of his Twitter and Instagram accounts and prompted a slew of companies including Adidas to cut ties with him. He also lost Billionaire status.

On Saturday morning, October 29, Kanye took to his Instagram page to question why ‘unknown powers’ are trying to destroy his life over his tweet. He stated that the decision to be dropped by his business partners may have proven that his suspicion was true. 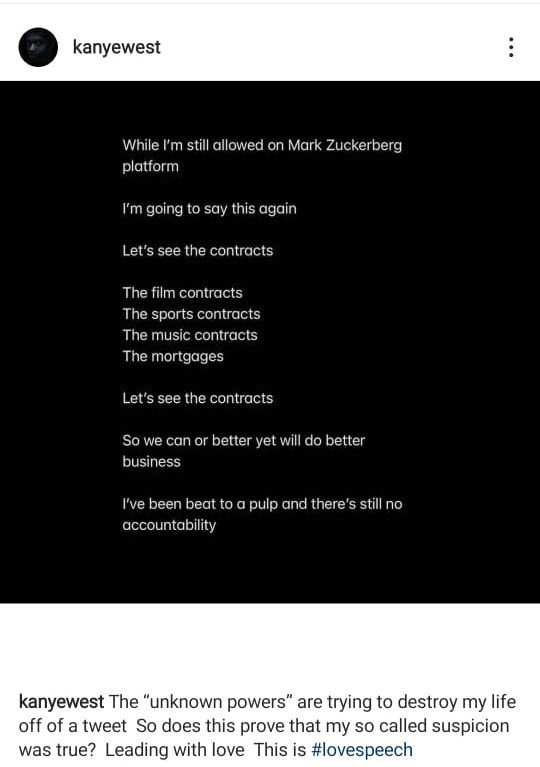