More photos have emerged of the gunman who killed at least 15 people including 11 children in a school shooting rampage in Russia on Monday morning, September 26.

Terrified pupils reportedly jumped from windows as Artyom Kazantsev attacked No. 88 school in Izhevsk – the capital of Russia’s Udmurt Republic roughly 600 miles east of Moscow. He later turned his gun on himself in a classroom after the killing.

Cops later found him to be carrying key chains paying tribute to Columbine shooters Eric Harris and Dylan Klebold, who staged an infamous school shooting in Colorado, USA, in 1999. 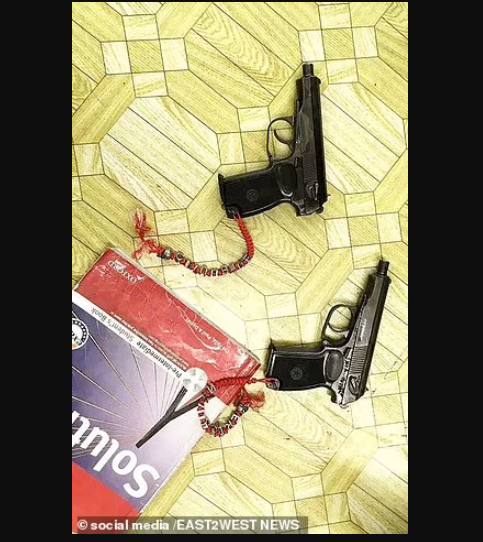 One chain displayed the words ‘Eric’ and ‘Dylan’, while the other one read ‘Columbine’.

Kazantsev, a former pupil of No. 88 school, had also scrawled the word ‘hate’ on some of the ammo magazines he used. 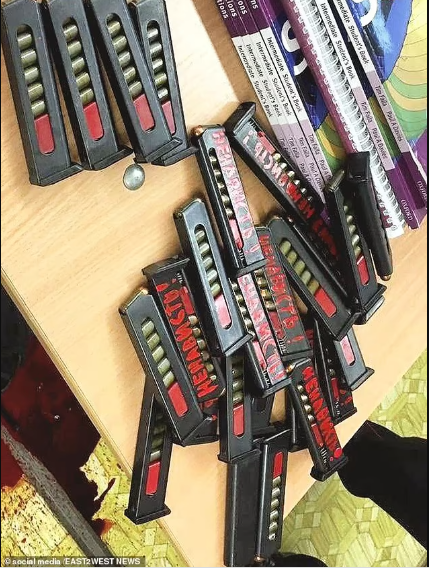 But a message thought to have been written by the attacker reposted to the Telegram messaging app read: ‘What happened is not a terrorist attack.

‘As the only reason for what happened, I ask you to cite hatred. I am not a member of any extremist organisations, I have no political demands.’

Reports said school director Elena Semashko, 50, had locked herself and a wounded teenager in an office to avoid the attack.

Once the attack was over, footage showed wounded children being taken out of the school to waiting ambulances.

One with apparent wounds was carried out on top of a school desk.
The school has 982 students and 80 teachers.

Many of those affected were first graders – seven years old – according to reports.

Russia’s Investigative Committee confirmed the death toll of Kazantsev’s attack stands at 13, while 14 more were injured.

Governor of Udmurtia Alexander Brechalov said: ‘We’ve got everything deployed at school 88. Special services, ambulance are all there. I am at the site, I’ll be reporting all updates.

‘So far, an unidentified person entered the school, killed a guard, it is already known that there are victims among children and wounded. Now the evacuation has ended.

Brechalov later reported: ‘It is already known that a guard was killed, there are victims among children, wounded… The attacker shot himself.’