Novak Djokovic has withdrawn from Indian Wells and the Miami Open, the first two Masters Series events of the year because of US coronavirus rules since he’s yet to be vaccinated.

Regulations require any non-US citizen to have a Covid vaccination before entering the country.

The 20-time Grand Slam winner, 34, was included in the draw for both events, but has since posted on Twitter that he knew it was “unlikely” he could travel.

“I knew it would be unlikely I’d be able to travel,” Serbian star Djokovic wrote.

“The CDC (Centers for Disease Control) has confirmed that regulations won’t be changing so I won’t be able to play in the US. Good luck to those playing in these great tournaments.” 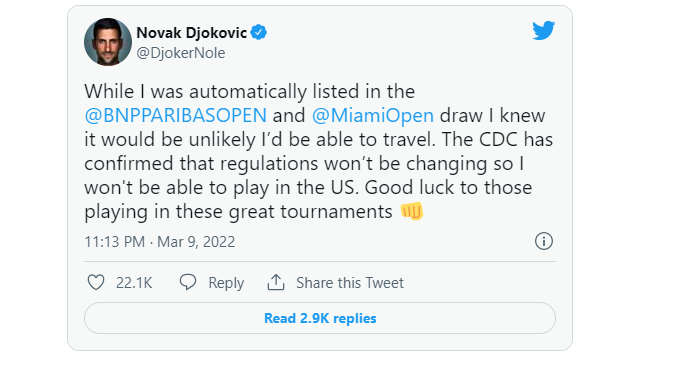 Djokovic’s participation at the two prestigious US tournaments had been shrouded in uncertainty for weeks given the US travel restrictions.

However, the 34-year-old 20-time Grand Slam singles champion had been named in the men’s draw for Indian Wells on Tuesday despite doubts over his status.

“Novak Djokovic is on the tournament entry list, and therefore is placed into the draw today,” tournament chiefs said on Tuesday.

“We are currently in communication with his team; however, it has not been determined if he will participate in the event by getting CDC approval to enter the country.”

Djokovic is a five-time champion at Indian Wells, where organisers have said proof of full vaccination will be required for spectator entry to the tournament venue in the California desert.

Djokovic was barred from the Australian Open in January after officials said he did not meet requirements for unvaccinated travellers trying to enter the nation.

His visa was eventually canceled and, after a legal appeal failed, he departed without playing.

Indian Wells organisers said Wednesday that Djokovic’s place in the main draw had been taken by Grigor Dimitrov, with a “lucky loser” from qualifying taking the Bulgarian’s berth.