A mum (pictured above) has been accused of selling her newborn baby to pay for a £3,000 nose job.

The disgraced 33-year-old mum has been arrested on suspicion of human trafficking in Kaspiysk, Dagestan, southern Russia.

According to police reports, the mum took a small deposit of £274 from a couple who agreed just five days after her son’s birth on April 25, to take the infant off her hands.

Soon after purchasing the boy, he fell unwell and the couple were asked for his birth certificate by medics when taking him to hospital. 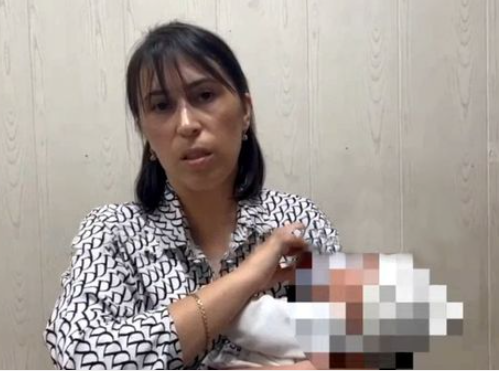 Getting the birth certificate cost them the equivalent of £1,370 a month later with the mum negotiating a price based on the cost of a nose job, the couple claimed following their arrest.

But before the couple could hand over the remainder of the total £2,730 fee, police arrested the group for human trafficking.

“She is suspected of committing a crime under paragraph ‘h’ of Part 2 of Art. 127.1 of the Criminal Code of the Russian Federation (purchase and sale committed in relation to a person who is in a state of helplessness, known to the guilty person).”

The statement continued: “According to investigators, on 25th April, 2022, a woman gave birth to a male child in Caspian City Central Hospital.

“On 30th April, 2022, the woman who had given birth was discharged from the hospital, where, having met with a local resident, she agreed to hand over her newborn son, who was in a state of helplessness, to him for a reward of 200,000 rubles.

“She then issued a waiver for the rights to the child, and the suspect received money amounting to 20,000 rubles for the child from the third party.

“The suspect was detained in accordance with Art. 91 and 92 of the Code of Criminal Procedure of the Russian Federation.

“Currently, a series of investigative actions is being carried out, aimed at establishing all the circumstances of the crime committed and consolidating evidence of the suspect’s guilt.

“The issue of choosing a preventive measure against her is being decided,” the statement concluded.