A 2-year-old girl was attacked by a coyote in front of her home before her horrified father rushed to save her.

In surveillance footage recorded on Friday, Dec. 2,  the little girl’s dad is seen packing up the family’s black SUV outside their Woodland Hills home as a coyote sneaks up on the toddler.

As the animal runs up to the little girl, she’s seen being knocked off her feet while the coyote tries to drag her away by her legs.

The child’s frantic cries alert her dad, who rushes over, grabs her, and shouts at the coyote. 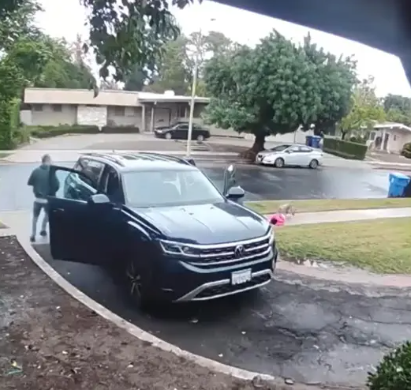 The panicked pop can then be seen picking up a plastic water bottle and throwing it at the coyote. The child’s mother, Shira Eliyahuo, ran frantically from the front door to her daughter’s aid.

Her dad, Ariel Eliyahuo, told NBC 4: “I heard her screaming and crying and I thought she fell down and I saw the coyote was there.”