A young man has cried out over suspected infidelity in his marriage after finding a hotel key in the bag of his pregnant wife.

According to the embattled husband, his wife’s phone rang close to him while she was in the kitchen, which became the beginning of suspicion in their marriage after finding a hotel key in her bag while trying to help with the phone.

Read his narration below …

“I remember at the beginning of our marriage, we had issues concerning her being in church all the time. I realized I couldn’t win the fight. When I didn’t allow her to go to church, she would be in the house but would not talk to me. She would be moody for days and that didn’t give me any joy so I told her, “You can go but come home early. Also, try as much as possible to reduce the number of days that you have to be in the church compound.”

No matter how hard I tried, I couldn’t stop her from going to all-night service on Friday nights. At first, I was going with her. But I couldn’t keep up. I was tired every Friday night. She went alone and came home very early the next day. I had no problems. A prayerful wife always keeps her husband grounded in God’s favor. My wife was very prayerful. I counted myself lucky.

One month ago, she was in the kitchen cooking when her phone rang. I looked around and realized the phone was in her handbag. I dipped my hand in the bag and came out with her phone and a key. The key was attached to a key ring that had a hotel name written on it. I was confused. When I took the phone to her, I wanted to ask about the key and how it got into her bag but something told me to keep quiet and rather find answers for myself.

We both know each other’s passwords so that night when she slept, I went through her WhatsApp messages. The last person who sent her a message on WhatsApp was me and that message was a week old. I scrolled through her chat history and there was nothing suspecting there. I checked her call logs too. Nothing suspecting. I went to her message apps and saw a particular name that had been sending her MoMo. At least, once every week, that name appeared to have sent her mobile money. I marked that number down.

From that day going, I woke up each dawn to go through her phone to see what I would find. On Friday night when she went to all-night service, I went to the church premises secretly to check if she was there. I saw her there. I stood close to the entrance of the church all night, waiting to see if she would get out. She didn’t. I checked her bag later on and the key was gone.

I was patient. I knew there was something fishy going on. A week later, I saw her chatting on her phone. She would be there smiling to herself while she typed. That night when she slept, I went through her phone. There were no messages. Smart girl. She had learned to cover her tracks very well. Five days ago, I got lucky. I saw a message between her and the name that had been sending her the MoMo.

It was 1am when I read the message. I slapped her thighs to wake her up. I asked, “Who’s Ato?” She asked, “What Ato?” I said, “The one that had been sending you Momo almost every week?” She said, “He’s a friend I went to training college with. Our year group is doing contributions and he sends his money to me every week.” I showed her the messages on her phone and asked, “So what are you two talking about here?” She said, “Oh this is normal conversations friends have? Why are you doing this? What’s your problem?” I asked, “He asked if you’ve sent it. What was he talking about?”

She chuckled; “Why all these questions? What’s wrong with you? He was asking if I had sent the money to the bank. What’s that? Don’t you trust me again?” Then I told her about the key I found in her bag. I asked how that key got into her bag. She said, “So you’ve been going through my bag too? What has come over you?” I said, “Answer me. What was that key doing in your bag?” She said, “A friend asked me to book a hotel room for her. She was coming to a wedding and didn’t want to be stranded.”

I stood there for a minute. I asked, “Which hotel gives you a key just because you booked a reservation?” She answered, “Some do, if you don’t know, ask. Don’t be ignorant. I’m a child of God. I won’t cheat on my husband”

I was dumbfounded. The calm with which she answered the questions and the clever way she did it made me feel very stupid in her presence. I went to the hotel the next day to ask if they gave keys to people who made reservations. The receptionist said, “No it never happens. We only give customers the keys on arrival.”

We’ve been fighting over this issue since last month. I doubt her. I don’t believe anything she had ever said to me concerning the issue. She’s two months pregnant so I don’t want to stress her or push her to the wall or do anything that would affect our baby but I have doubts and this doubt is killing me slowly. I want the truth from her and I don’t know how to go around it. Please help me, what else can I say or do to make her tell me the truth without stressing her? The pregnancy is our first since we got married three years ago. I don’t want to affect it in any way but I still want to know the truth.” 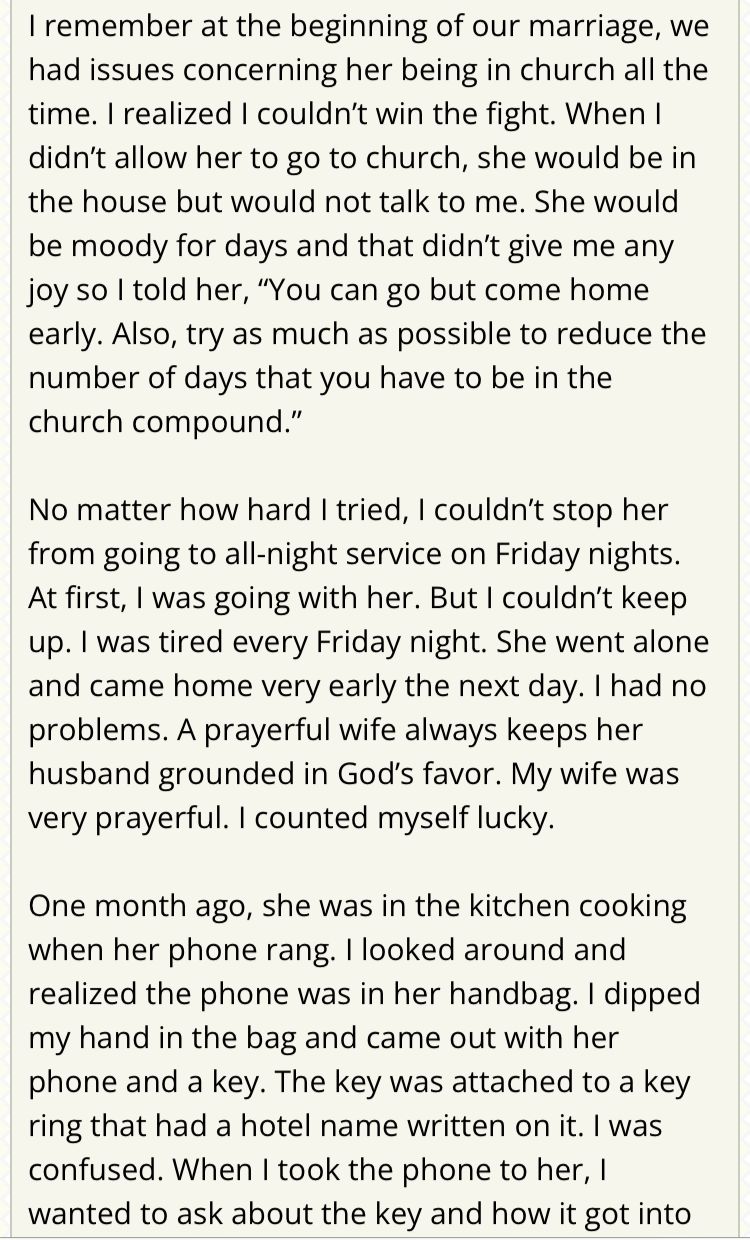 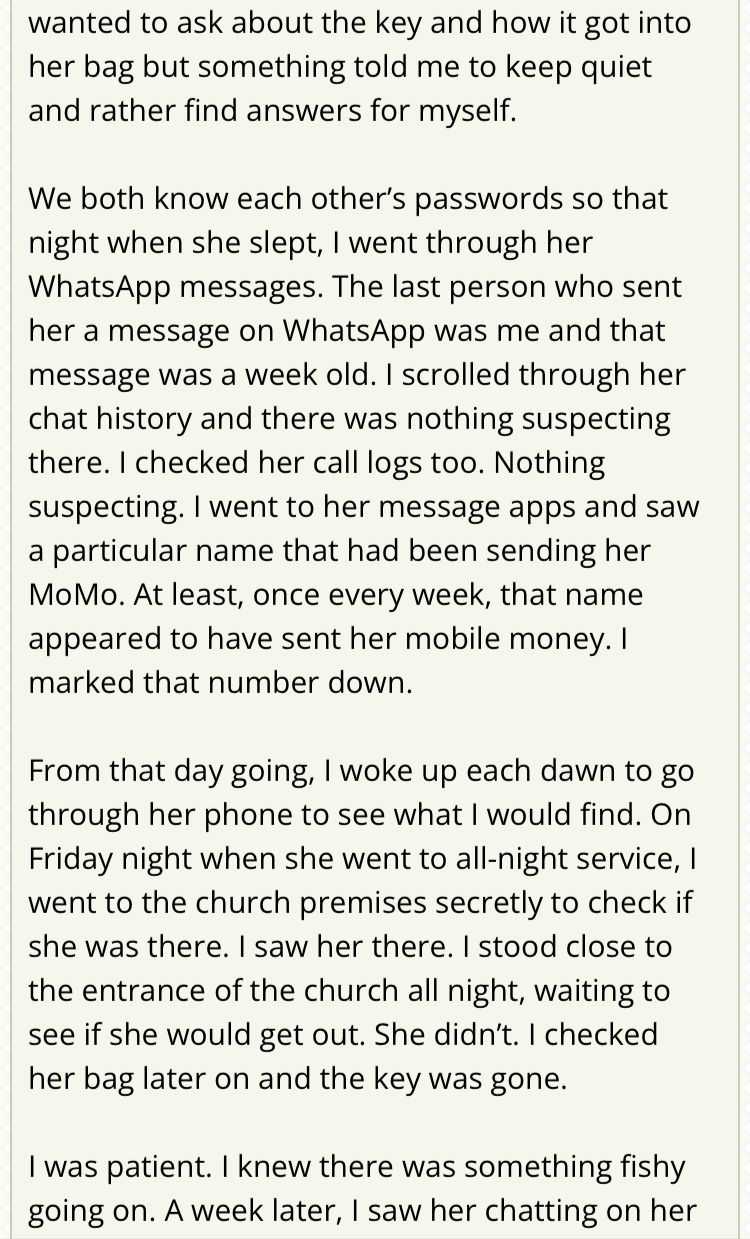 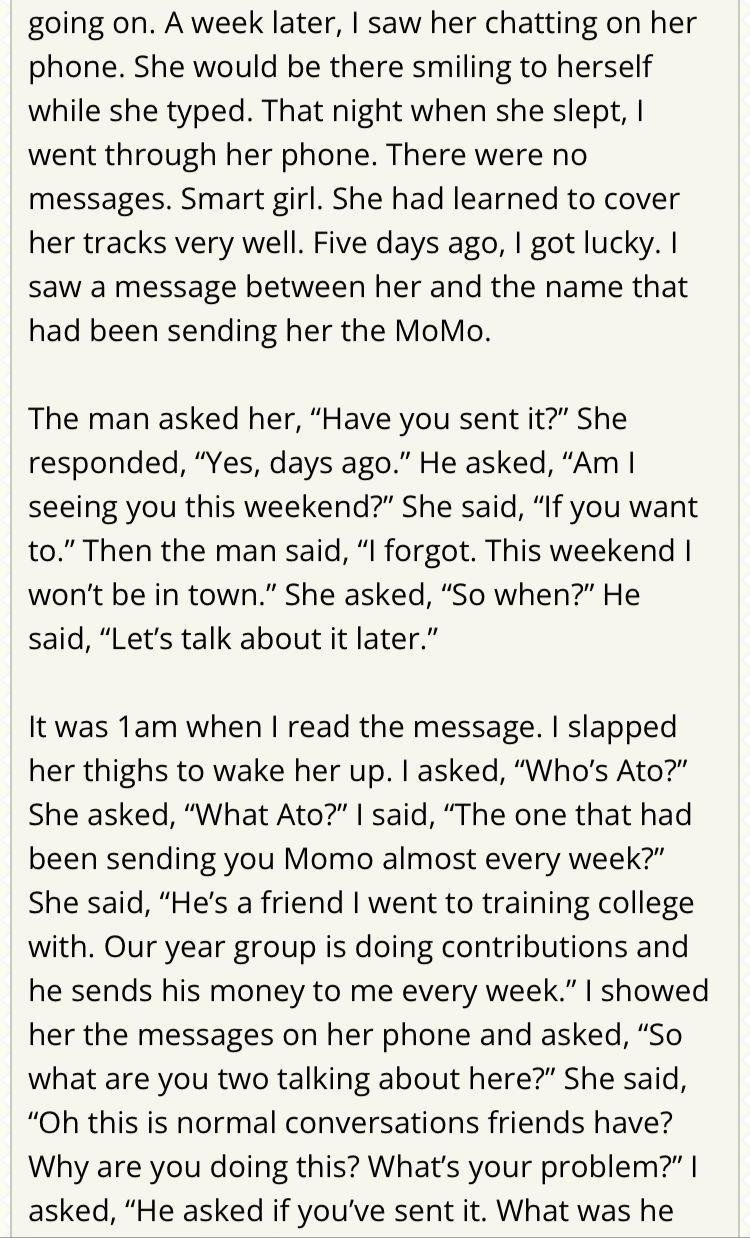 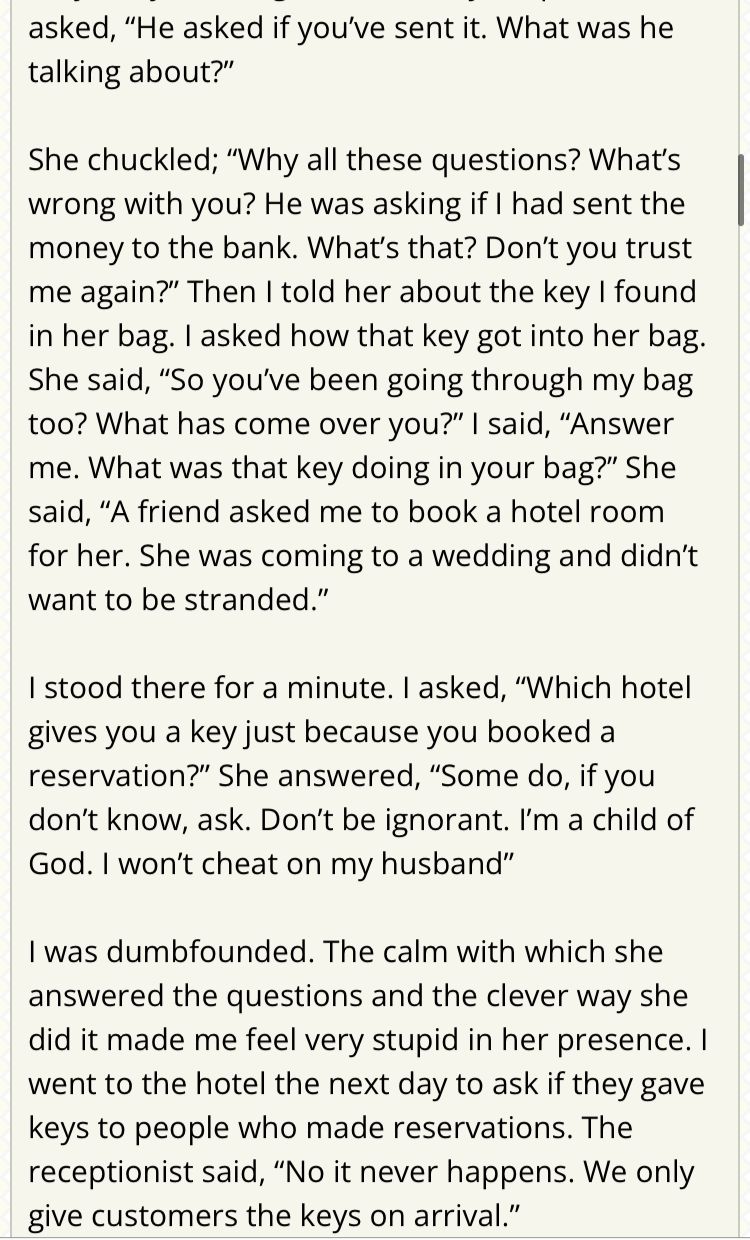 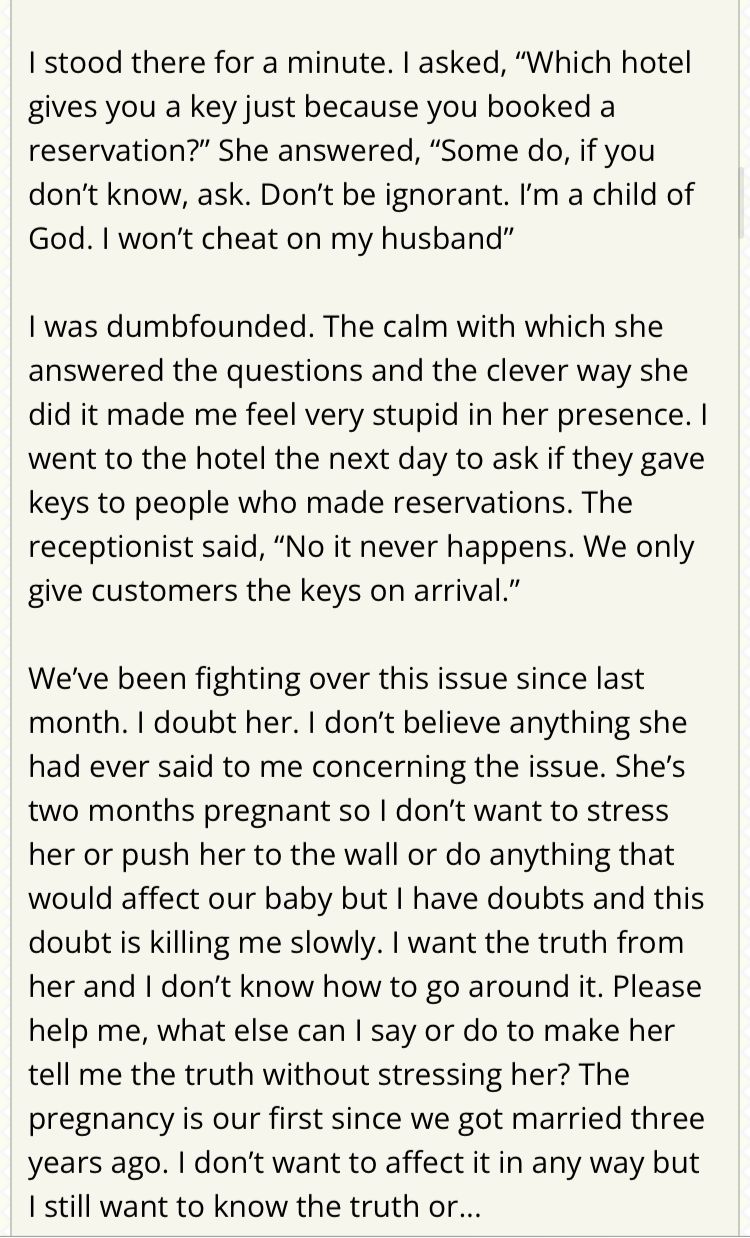