Runner-up for this award 12 months ago, the Belgian picked up where he left off as he inspired City to the Premier League title and through to the Champions League final where a facial injury forced him off.

Became only the tenth player to win a European Cup and a EURO in the same year, starting every EURO 2020 game for Italy having missed just one in the Blues’ run to Champions League glory.

Finished the Champions League season like a train, with Player of the Match performances in both legs of Chelsea’s semi-final win against Real Madrid and then the final against City.

The rest of the top ten

What is the UEFA Men’s Player of the Year award?

For this award, players in Europe, irrespective of nationality, have been judged in regard to their performances over the whole season in all competitions – both domestically and internationally – at either club, or national team level.

How were the players shortlisted?

The shortlist of three players was selected by a jury comprising the following:

55 journalists selected by the European Sports Media (ESM) group, one from each of UEFA’s member associations

Jury members chose their top three players, with the first receiving five points, the second three and the third one. Coaches were not allowed to vote for players from their own team. 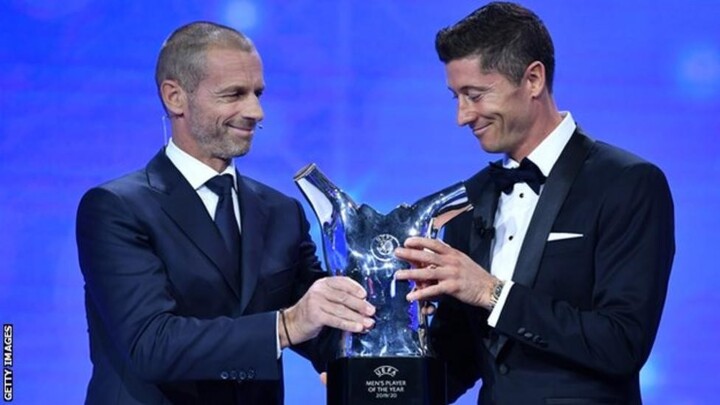 Robert Lewandowski won the 2019/20 UEFA Men’s Player of the Year award. The Bayern striker scored in every game en route to the UEFA Champions League final in Lisbon, picking up 15 goals and six assists as well as the trophy he had coveted for so long. He also hit 34 goals in 31 Bundesliga matches and six in five German Cup games.