The Canadian authorities have confirmed the identity of the family of four found frozen to death in a field at Emerson, Manitoba, near the US-Canada border.

Bodies of Jagdishkumar Patel, 39; his wife Vaishaliben Patel, 37 and their children, Vihangi Patel, 11; and Dharmik Patel, 3, were discovered in the field on January 19, 2022.

The Patel family had migrated from Dingucha village in Gujarat, India.

According to a statement from Royal Canadian Mounted Police (RCMP), the autopsies of the four were done on January 26 by Manitoba’s chief medical examiner who confirmed that the cause of death was due to exposure to extreme weather conditions.

“We can confirm that on January 12, 2022, the Patel family arrived in Toronto, Canada. From Toronto, the family made their way to Emerson on, or about, January 18, 2022,” the Royal Canadian Mounted Police said on their website.

Since a vehicle was not recovered, the family is believed to have been dropped off at the border, according to the police, who are trying to determine how the Patel family travelled from Toronto to Emerson.

“With what we know so far of their activities in Canada, along with the arrest that occurred in the United States, we believe this to be a case of human smuggling,” they said.

The authorities are looking for anyone who might have encountered the family.

Seven Indians were picked up by U.S. border forces on Wednesday last week and are in various stages of removal proceedings, U.S. Customs and Border Protection had told The Hindu.

A criminal complaint was filed last week in the US District Court for the District of Minnesota against 47-year old US citizen Steve Shand, who has been charged with human smuggling.

Meanwhile, India’s High Commission in Ottawa, Canada said in a press release, which also identified the four victims, that the next of kin of the deceased have been informed.

The Consulate General of India in Toronto is in touch with the family of the deceased and is providing all consular support. 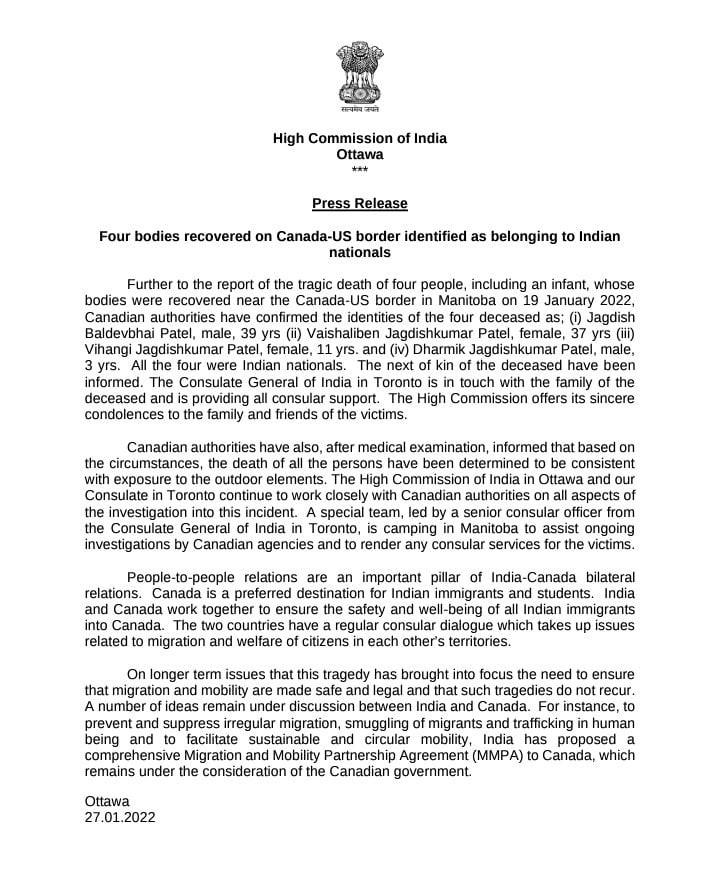