Olympic gold medalist, Simone Biles broke down in tears in an emotional interview while discussing her inability to do stunts she has been doing for years.

The 24-year-old admitted that since the Tokyo Olympics, she hasn’t been able to go back to stunts that involve twisting in mid-air. Recall she dropped out of several events at the Tokyo Olympics due to mental health concerns

According to her, she’s still battling the twisties and this has made it difficult to watch her fellow gymnasts do twists on the Gold Over America Tour. 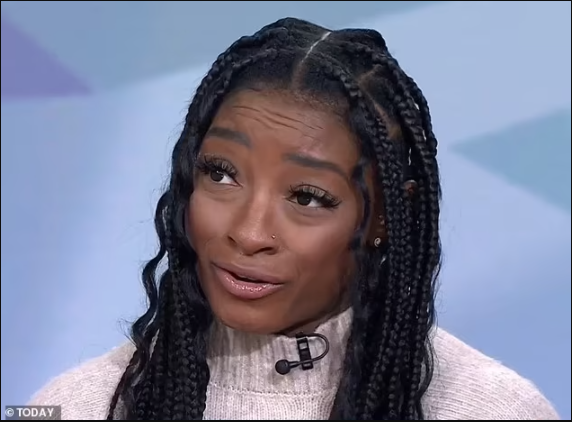 ‘To do something that I’ve done forever and just not be able to do it because of everything I’ve gone through is really crazy because I love this sport so much,’ she told Today show host Hoda Kotb, blinking away tears.

‘It’s hard. I’m sorry. And I don’t think people understand the magnitude of what I go through, but for so many years to go through everything that I’ve gone through having a front, I’m proud of myself.’

Biles said that she is doing ‘a lot better’ since the twisties took her out of Tokyo.

The condition is similar to the ‘yips’ in other sports, when athletes psych themselves out — but in gymnastatics, it can mean losing a feel for where the gymnasts is in the air, which can lead to catastrophic injury, or even death, if they land wrong.

Biles is currently on tour with teammates Jordan Chiles, MyKayla Skinner, Jade Carey, and Grace McCallum, and she said it’s difficult to watch them all doing twists in the air just as she had done for years — because now she can’t do them. 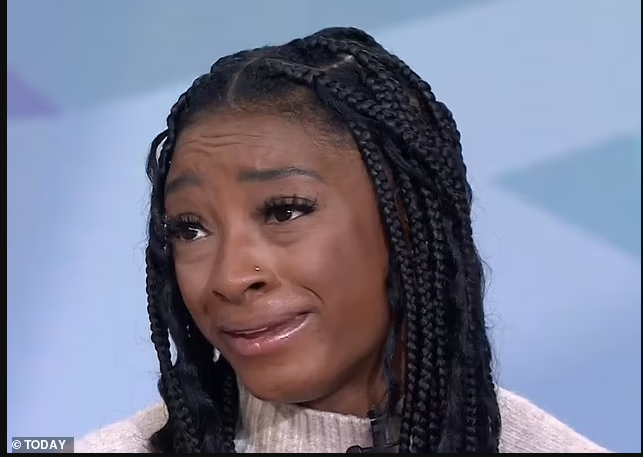 ‘[It] weighs so heavy and I watch the girls do it, and it’s just not the same,’ she said.

‘And I’m happy I can be a leader for the survivors and bring courage to everybody speaking up, so I’m happy to be a voice for them. But we go trough our own things. It’s hard.

‘The twisting once I got back will come back, but I’m still scared of gymnastics,’ she admitted.

‘It does kind of suck because I worked really, really hard for that, and it’s just hard.’

Biles also explained why she thought the faltered in that big moment in Tokyo, explaining that she had suppressed her feelings over her sexual assault at the hands of former team doctor and convicted sex offender Larry Nassar.

‘Over the years, after supressing so many emotions and putting up a front a global scene, I think all of that came to light and my body and my mind allowed me to supress all of that stuff for so many years, for as long as it could take,’ she said.

‘And as soon as we stepped onto the Olympic scene, it just decided it couldn’t do it anymore and it cracked, and that’s what happens.

‘And that’s why taking care of your mental well-being and mental health is so important, so

She said that when she began experiencing the twisties and had to drop out of events, she had to resist the urge to blame herself. 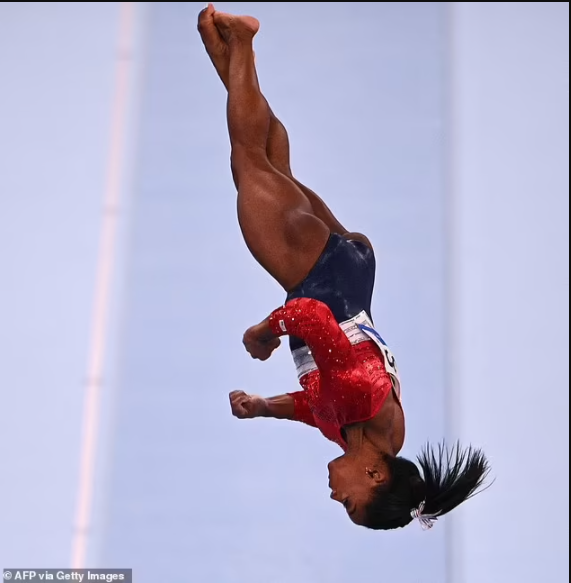 ‘In the moment, I tried to blame myself again, but I knew I couldn’t put that blame on myself,’ she said.

‘And once that happened, all the pieces were put together, and I knew exactly what was going on, why it was happening, and it sucked because, again, I’m on a global stage and everybody gets to watch me go through that. And they get to form their own opinion before I even get to voice and say what’s going on.’

Biles has opened up about suffering from panic attacks, and revealed how she is getting a handle on them.

‘Now I have different techniques that I can use, but you know, to go through something like that and be a voice for all of the survivors and people who want to come forward and talk about their stories, it’s just, it’s really inspiring but it’s hard that I have to go through it. Because, again, people form their own opinions and I don’t really get to say what’s going on,’ she said.

As for becoming a face of mental health, Biles said that she is doing the best she can.

‘It’s been unique, because everybody’s journey is unique and different,’ she said. ‘And going through something like that on a global stage is so crazy, so I’m trying to navigate that the best way I can while still going out there and putting on shows, which I absolutely love to do because it brings me so much joy.

‘But at the end of the day, I still go through my own set of problems that I have to deal with,’ she said.

During her TV appearance this morning, Biles also announced that she has partnered with the mental health and telemedicine app Cerebral as its chief impact officer. She has also invested in the company.

‘Getting the mental health therapy that I need has been really releiving to me, especially being on the road, on tour. So I’m really happy to have such a great app to help out with that,’ she said.

She said it was ‘super important’ that she started therapy before going on the road.

‘As hard as it was to get started with that, it definitely helps,’ she said, adding that she also loves to take daily walks, be outside, decompress from social media, and indulge in a little retail therapy.