Robert Cormier, who played Finn Cotter on the Canadian television series Heartland, has died at the age of 33.

Cormier died on Friday September 23, according to his obituary, though no details were revealed about his cause of death.

Following news of his death, UPtv, an American network that airs the CBC series, paid tribute to the rising star.

‘Robert Cormier, aka Heartland’s Finn, was an amazing talent, gone too soon. We are deeply saddened to learn of his passing. Our sincere condolences go out to his friends, family, and co-workers,’ the network wrote, adding a dove emoji. 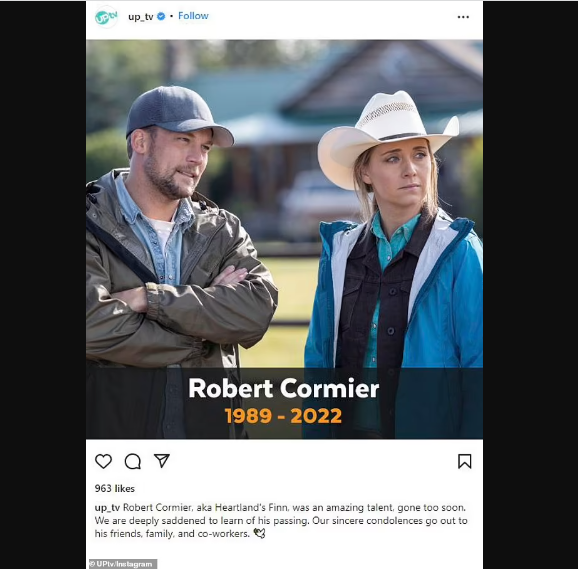 According to his IMDb biography, Cormier was born in Toronto, Canada, and he went on to become the first actor in his family.

After heading south to get a degree in Fire and Engineering Extension Services at Texas A&M. He then attended a graduate program at Toronto’s York University in World Economics, but left before completing it to enroll in film school, which he graduated from.

‘We are deeply saddened to learn of the passing of Robert Cormier. He was a beloved member of the Heartland cast the last two seasons,’ the post read. ‘On behalf of the Heartland cast and crew, our thoughts are with him and his family, who have asked for privacy during this difficult time.’

He is survived by his parents Robert and Lisa, and his sisters, Brittany, Krystal and Stephanie.