Manchester United manager Erik ten Hag has accused Cristiano Ronaldo of double-crossing him by engineering his departure from the club and claimed the Portuguese was not in “good shape”. 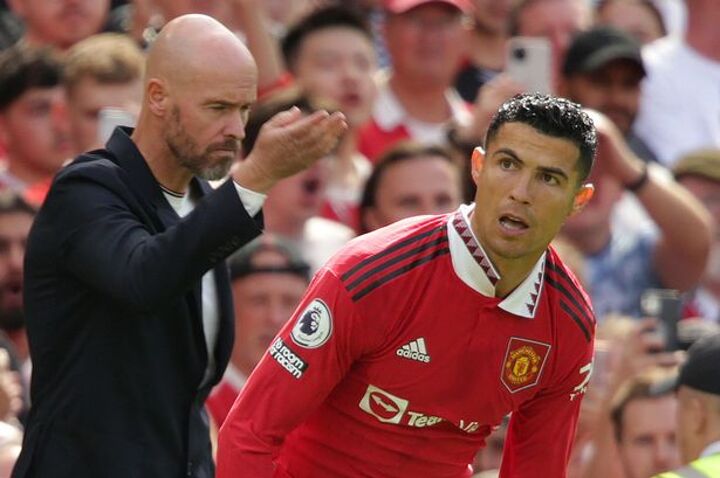 In a 90-minute chat on Talk TV that aired on November 16, Ronaldo said he had “no respect” for Ten Hag and made a number of unflattering accusations about the club’s owners and facilities.

Ten Hag did not speak to Ronaldo after his sit-down with Piers Morgan aired and revealed the 37-year-old never had the decency to tell him in person that he wanted to leave United.

During a luncheon with the Manchester Evening News and other members of the British press at United’s winter training camp in Jerez on Friday, Ten Hag said: “I think it was quite clear after [the interview] that he had to leave. I think we didn’t have to discuss it. It was quite clear. Richard [Arnold], John [Murtough], me.

“I wanted him to stay from the first moment until now. He wanted to leave, it was quite clear. And when a player definitely doesn’t want to be in this club then he has to go, clear.

“The interview I think, as a club, you can’t accept. There will be consequences. To make that step he knew the consequences. Before he never told me [he wanted to leave].

“During the season there was no window but until that moment he never told me ‘I want to leave’. You (gestures to suggest everyone knew Ronaldo wanted out) don’t have to see it.

“As you said, it is the past. We are looking to the future. Move on. I want to go to the future. We want a new future of Manchester United and he didn’t want to be part of it. We move on.

“When he is in good shape, he is a good player and he could help us to get back and achieve the objectives we have. That is quite clear. But he wasn’t.”

Ronaldo missed United’s pre-season tour of Thailand and Australia in July as his baby daughter Bella, who was born in April, had contracted bronchitis.

United confirmed Ronaldo’s departure by mutual consent on November 22, nine days after it emerged he had conducted an unauthorised interview with Morgan.

Ronaldo had already been disciplined by Ten Hag for leaving Old Trafford early after playing the first-half of the friendly against Rayo Vallecano on July 31 and for refusing to come on in the 2-0 win over Tottenham on October 19. Ironically, Ronaldo captained United on his final appearance for the club against Aston Villa on November 6.

Despite Ronaldo’s acrimonious departure, Ten Hag would not hesitate to speak to him again in the future. “Oh yeah. Not in particular that I would ask him something or if I would say something to him. I did everything honest and open and transparent and we had talks about my vision, so I don’t have a problem to talk with him.

“I don’t want to answer such a question (if he could forgive Ronaldo). I am open to talk with him so why not. Yeah, it can be [he showed a lack of respect]. But I don’t give anything to that. We move forward. I don’t want to spend energy on that. It is the past. We are moving forward.

“Once again, for me, he did what he did. It is the past. I don’t spend energy. We go forward and we prepare. So when [the World Cup participants] return, we still have games to play in the first half of the season. We want to make a success of this season, so we focus on that.

“We are in a process. We are moving on. Ronaldo was part of it but he has chosen to take another pathway.”

Ten Hag’s handling of Ronaldo has been further vindicated after the 37-year-old was dropped by Portugal coach Fernando Santos for their 6-1 thrashing of Switzerland in the last 16 of the World Cup, with Ronaldo’s replacement Goncalo Ramos poaching a clinical hat-trick.

When it was suggested Ten Hag had tried to manage Ronaldo’s decline and it was thrown back in his face, he replied: “Yes, but he chose. I don’t want to spend energy on that. I would have preferred it to be in a different way because I wanted to work with him. He chose another way.

“We wanted him to be part of our project, to contribute to Manchester United because he is a great player. He has such a great history, but it’s the past and we have to look into the future and I don’t spend my energy on it.”

Ten Hag disagreed it would be easier for United without the distraction of Ronaldo’s histrionic behaviour. “I like to work with world-class players because I know they can make a difference to help you achieve your objectives. That is why you want to have such players in your dressing room. But we never came on one page and then what happened happened.