A California bicyclist narrowly escaped being mowed down when a Porsche fleeing police ran a red light and slammed into another car as the biker was crossing an intersection.

The incident took place at east Julian Street and north 17th Street in San Jose, US, on Thursday, March 24, and the CCTV footage was released on Monday, March 28.

The footage shows the heart-stopping moment a Porsche SUV driver flouted traffic rules and ran a red light in the opposite direction to the cyclist.

As the cyclist takes a swerve to the right, the car slams into a silver sedan at the junction and the two cars careen across the street, taking out a traffic light before coming to a stop in a front yard.

Fortunately, both drivers survived and so did the cyclist.

San Jose police said the driver of the Porsche SUV, Carlos Bryand, was fleeing from officers at the time of the incident after the 53-year-old driver was clocked for speeding. 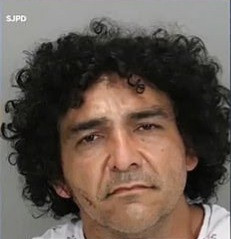 Cops said they did not chase after the Porsche, due to department protocol, but caught up and arrested Bryand after the crash.