A bus on a school run has crashed and flipped over, leaving a ‘number’ of children in hospital with injuries in the UK.

Emergency services were called to the incident involving the overturned bus on the B3090 Oldford Hill on the outskirts of Frome, Somerset at around 3.30pm.

Wiltshire Air Ambulance was also spotted flying above the area after it was called to the scene following the crash. 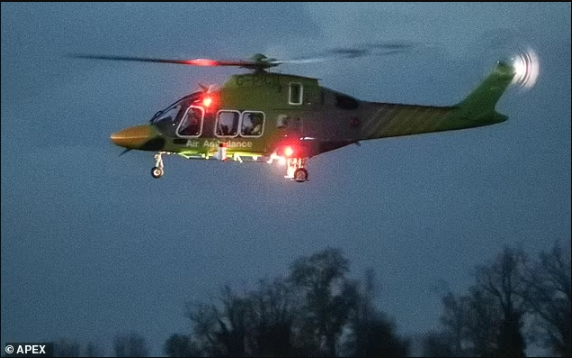 Images shared online show the overturned bus with emergency services standing around and several police cars in the background.

An Avon and Somerset Police spokesman said: ‘Emergency services have been called to an incident involving a bus near Frome this afternoon.

‘Police received a call from a member of the public at approximately 3.35pm, that a bus had overturned on the B3090 Oldford Hill.

‘A number of passengers, including schoolchildren, received minor injuries and were checked over by paramedics at the scene.

‘A small number are being taken to hospital by land ambulance for further treatment or assessment.

‘Their injuries are not considered to be life-threatening or life-changing.

‘Officers are liaising with the school, as well as the parents of children involved in this incident.

‘Enquiries will continue at the scene to establish the cause of the collision. ‘The road is likely to remain closed for some time, so we’d ask motorists to avoid the area if possible.’