Britney Spears has accused her mother Lynne of allegedly coming up with the idea for her conservatorship in a since-deleted Instagram post.

This comes after it was revealed that the singer’s father Jamie had called for the “immediate termination” of his daughter’s conservatorship.

According to the new court documents, the singer’s father believes that “Britney’s recent testimony and requests to take personal control of her estate and affairs have made clear that continuing the Conservatorship is contrary to her desires”, Fox News reports.

On Instagram, however, Spears called out her mom Lynne as she shared a picture reading: “The most dangerous animal in the world is a silent smiling woman.”

She wrote: “The moment I SMILE and I realise I haven’t in a very long time !!!! My mum gets so CONCERNED and says ‘You’re acting weird … what’s wrong with you ???’ I say ‘Hi, my name is Britney Spears … nice to finally meet you !!!’

“Before I go any further, forgive me in advance …. It’s been 13 years and I’m a little rusty !!!! It was a family business before … it’s no longer that anymore !!!! I was BORN today cause I get to SMILE … so thank you for exiting out of my life and finally allowing me to live mine !!!!”

The singer continued: “Psssss my dad may have started the conservatorship 13 years ago … but what people don’t know is that my mom is the one who gave him the idea !!!! I will never get those years back …. she secretly ruined my life.”

Britney went on to say that she did not believe her mother’s protestations that she had “no idea what’s going on”, telling Lynne to “go f*** yourself” and adding middle finger emojis.

“You know exactly what you did … my dad is not smart enough to ever think of a conservatorship … but tonight I will smile knowing I have a new life ahead of me !!!!” 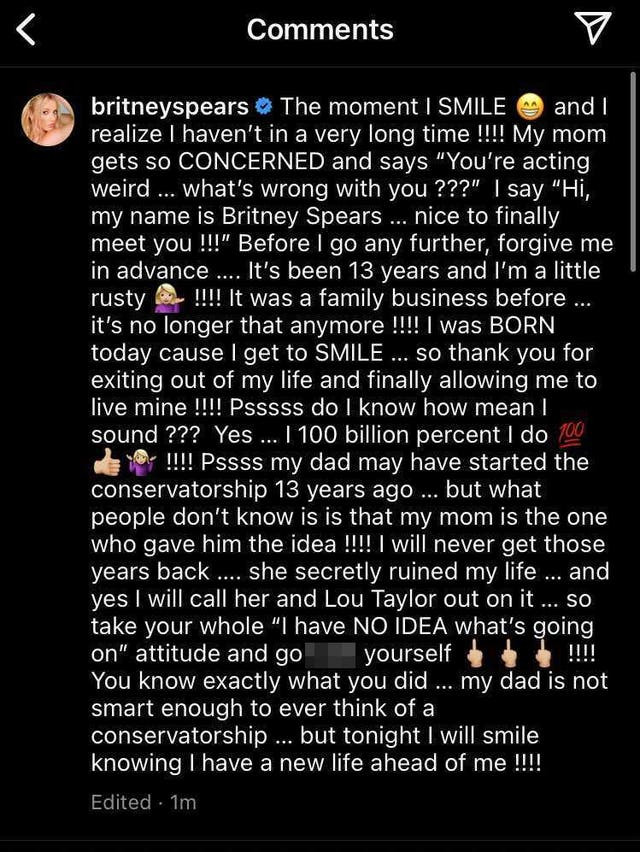 The post was swiftly deleted from the singer’s page but has already been widely been shared online.