Brazilian President, Jair Bolsonaro, has been admitted to hospital following complaints of stomach pains after being plagued by a bout of hiccups for more than 10 days.

The 66-year-old was admitted to the Armed Forces Hospital in Brasilia early Wednesday morning, July 14.

An initial statement said doctors were examining his persistent hiccups.

However, hours later, the president’s office said Dr Antonio Luiz Macedo, the surgeon who operated on him after he was stabbed in the abdomen during the 2018 presidential campaign, decided to transfer him to Sao Paulo, where he will undergo additional tests to see whether he might need emergency surgery.

The stabbing caused intestinal damage and serious internal bleeding and the president has gone through several surgeries since, some unrelated to the attack.

Shortly after news of his transfer to Sao Paulo, Bolsonaro posted on his Facebook page a photo of himself smiling with his eyes closed and lying in a hospital bed covered in sensors and cables. 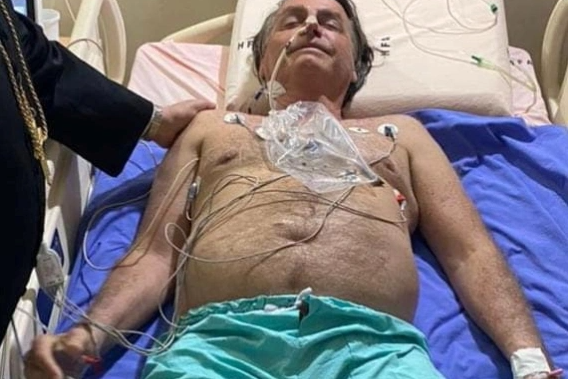 “I thank everyone for their support and prayers,” Bolsonaro said in the post.

Bolsonaro’s health has been an issue for much of his presidency, after he was stabbed in the intestines on the campaign trail in 2018 and nearly died.

In recent weeks, Mr Bolsonaro has appeared to struggle with speaking on various occasions and said that he suffers from recurring hiccups following surgery on a dental implant on July 3.

During an interview with Radio Guaiba on July 7, he said: “I apologise to everyone who is listening to me, because I’ve been hiccuping for five days now.”

He suggested that some medications prescribed after dental surgery might be the cause, adding: “I have the hiccups 24 hours a day.”