Maroon 5 frontman, Adam Levine hit the stage to perform in Las Vegas for the first time since his sexting scandal and he had his pregnant wife beside him as he returned to the spotlight.

The 43-year-old singer-songwriter sang on Saturday, October 1, alongside his longtime band at Shaquille O’Neal Foundation’s annual fundraising gala, The Event. 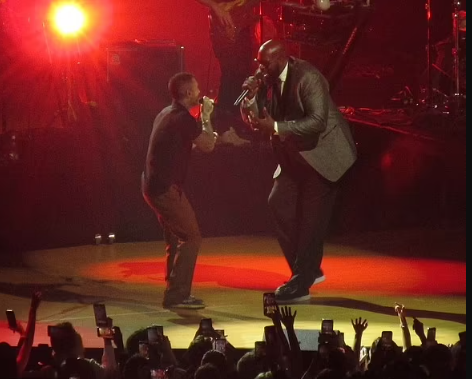 Sumner shared screenshots of her chat with Adam Levine, including one where Adam told her he will like to name the baby his wife is carrying after Sumner.

After Sumner’s revelation, other women emerged to share screenshots of the inappropriate chats Levine sent to them.

Despite the sexting scandal, Adam’s wife Behati Prinsloo seemed in “great spirits” at the event, according to onlookers.

It comes after the longtime couple, who already share daughters Dusty Rose, 5, and Gio Grace, 4, were seen boarding a private plane out of Santa Barbara last Tuesday.