A man infected with HIV has lamented bitterly on the safety of a 19-year-old girl to whom he transferred the infection after deflowering her.

A chat between a man and his friend who confessed about being a carrier of the virus narrated how he transferred the infection to a teenager before realizing his status.

In his narration, the embattled man is in a dilemma for ruining the future of the young girl at the same scared of how to break the news to her.

Read the full narration below …

“I have HIV&aids the saddest part of it is that I transferred it to my gf and that’s one reason I’m trying to give her anything she wants cos she’s innocent and she doesn’t know yet that she has it though ppl complained about her being lean I was scared they find out so I bought her milk and all sorts of goodies and make sure she eats well if she cheats on me she will be transferring it to another person.

I have reached my last bus stop of womanizing cos I don’t want to spread the wickedness but I cry deep inside cos I have infected an innocent girl that just starts her life 19 years old to be precise.

I didn’t know I was infected until last year after I went for check up because I started seeing the symptoms. I was the one who disvirgin this girl so there is no way she was the that infected me cos I know have being a reckless player all my life.

May God console if I’m gone soon before she realize she too has being infected.” 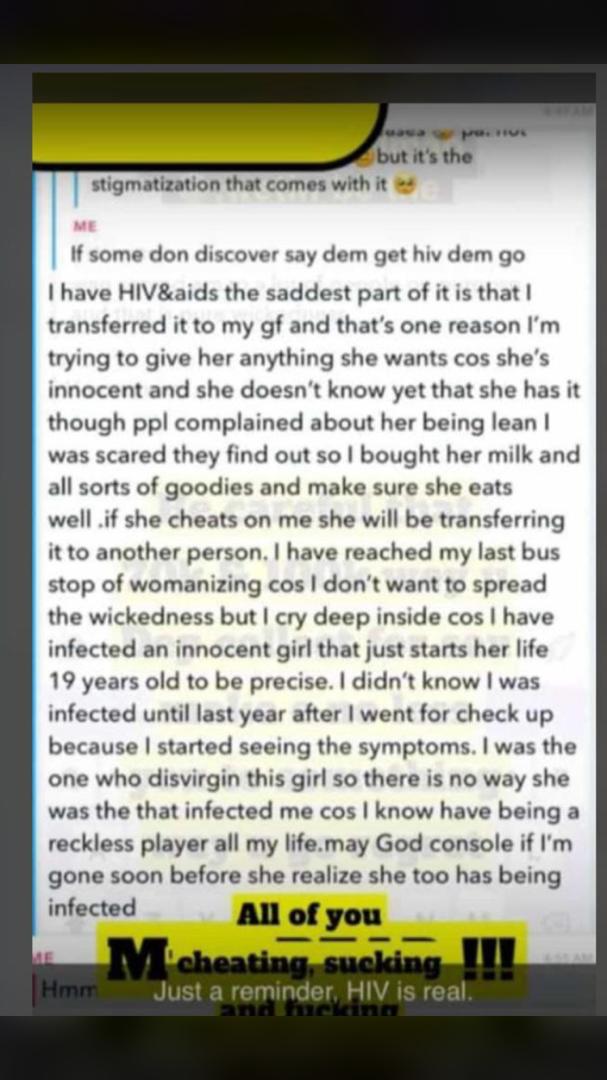